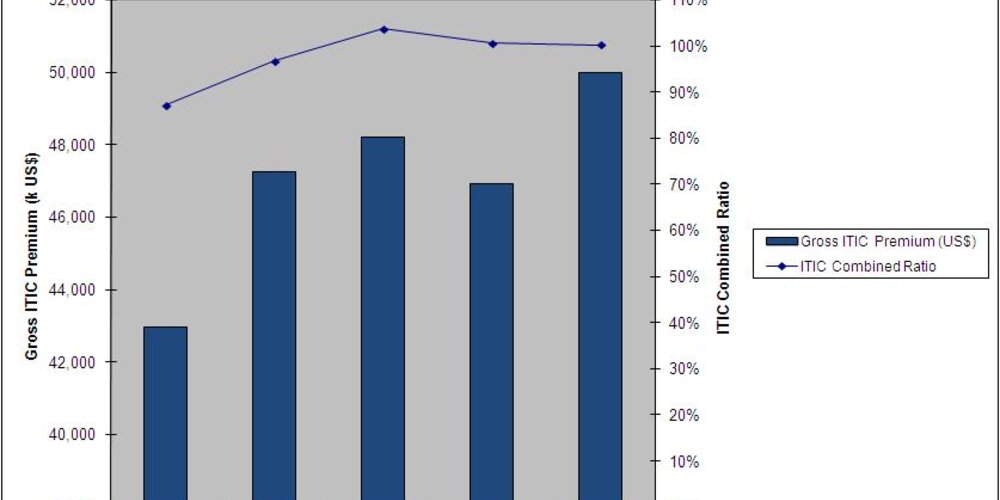 We all sense, in our day to day lives, the growing compensation culture in society; the perception that those who feel wronged will, increasingly, seek financial compensation for their losses, even if these losses are small, or perhaps even questionable. As a professional indemnity insurer providing coverage for negligence claims, as well as legal costs protection, ITIC is uniquely placed to try to measure the extent of this compensation culture. We can confirm that in an economic downturn the volume of litigation increases, revealed simply by the year on year increase in average size of ITIC claim between 2008 and 2010 of 11%.

Another insurance statistic always worth reviewing is the combined ratio of an insurance company. This is the proportion of top line premium income absorbed year on year by claims and operating expenses. It is not uncommon for many insurers to operate permanently with a ratio exceeding 100%, using their financial reserves or investment income to make up any shortfall. A graph illustrating ITIC’s five year combined ratio is opposite.

ITIC was able to operate a combined ratio of below 100% through the 1990’s and early 2000’s, allowing the Club to grow in size and strength, whilst at the same time paying members a healthy dividend on their membership of ITIC. This dividend, or continuity credit system, is still with us today.

Since the global financial crisis in 2008, ITIC’s combined ratio has come under pressure from claims and a weaker investment return, but there are firm plans in place to return it below 100% in the coming years.

Unlike the ship owners’ P&I clubs, ITIC does not operate a general increase model of underwriting. Instead, we focus upon individual and sub classes of the membership whose premiums require rate adjustment. This can be because of claims or the higher limits of coverage they purchase. In response to the growing average size of claim, and target to bring the combined ratio below 100%, the 2011 policy year (ending June 2012) saw an overall rate increase of 7% from renewing members. Firm evidence of the support provided to ITIC by members and their brokers.

Members and brokers will also be aware that ITIC have been asking certain sectors of the membership to take higher deductibles in common loss areas. This focus on selective risk sharing has also been a successful feature of renewals in both 2010 and 2011.

One of ITIC’s unique selling points is our willingness to comment and advise upon contract wordings. In the battle with the compensation culture, sound contractual risk management is essential for all professional service providers. Making sure that you do not commit your company contractually to financial obligations the company cannot afford to meet, or which insurers will be surprised to see, has to be of paramount importance. A growing number of transport professionals now trade under standard conditions of contract and we would direct you towards ITIC’s website, where templates and advice is available, all of it free of charge.

Thank you to all insurance brokers, and members, for their ongoing support of ITIC in 2011 and 2012.