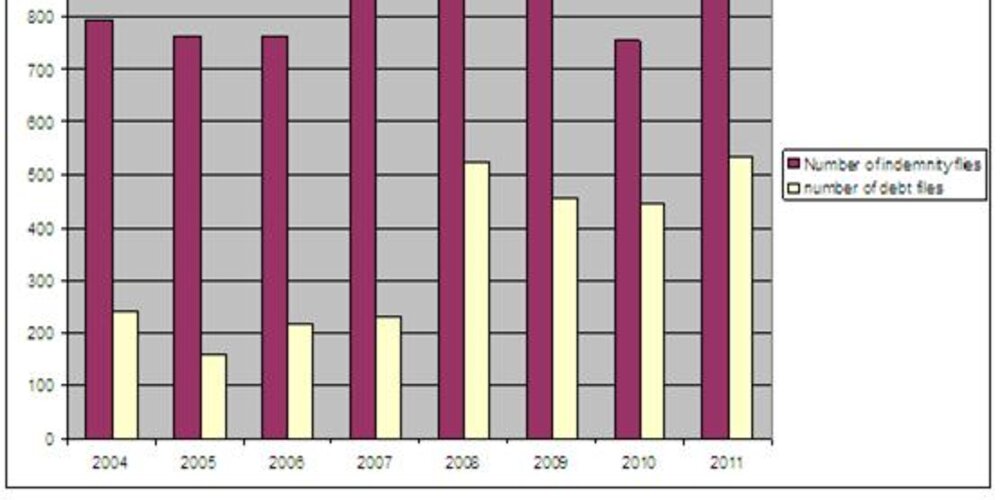 The number of indemnity claims reported to ITIC peaked in 2008 and then fell by 20% over the next two years. There has however been an increase in 2011 to about 90% of the 2008 peak level.

Debt collection files are only for members who buy Rule 10 - Debt Collection and Legal Expenses. These are typically shipbrokers and ship agents. The cover is for the legal fees incurred in assisting to collect the debt.

The number of debt collection files followed the same pattern as indemnity files with a peak in 2008 followed by two years of reduced levels. The rise in 2011 has been more notable and the figure has exceeded the level seen at the 2008 peak. This is clearly a reflection of the current difficult economic conditions.

Indemnity claims arise from a variety of causes. Recently, there has been a greater prevalence of claims arising from fraudulent acts of employees. This is also likely to be a consequence of the poor economic climate and the members involved have often been liner agency companies. Other common claims from this section of ITIC’s membership involve errors relating to the temperature settings of reefer cargoes.

Port agents have faced claims from port authorities holding them liable for acts of ship owners. In 2012 ITIC assisted a ship agent who was held liable by the local maritime authorities for the removal of the wreck of their principal’s ship which had sunk on the approach to a port.

The collapse in the shipping markets led to an increase in both the number and size of claims against shipbrokers. More recently there have been disputes relating to fixture terms involving transiting the Gulf of Aden. The number one claim against tanker brokers remains demurrage claim documentation which has not been passed on by the broker within the time permitted in the charterparty.

Litigation by shipowners against their managers frequently involves the production of vast amounts of documentary evidence. In a recent case in the US there were demands that the managers produce over 5 million documents. A court approved IT specialist was employed to oversee the tracing and production of relevant emails. Ultimately the claims were dismissed by the court but the extensive legal costs could not be recovered from the opponents. ITIC’s cover meant the manager was not left with the bill.

ITIC has dealt with a number of claims against the range of transport professionals it insures including marine surveyors and naval architects. Often by the use of technical expertise such claims can be resolved quickly, privately and without the damage to commercial relations that result from litigation.

The role of ITIC is not however restricted to handling claims. Loss prevention is an important part of ITIC’s work. This often involves reviewing the liability elements of members’ contracts and the encouraging of the use of appropriate trading conditions. Presentations on loss prevention have been given both at seminars arranged by industry bodies and at individual members’ offices.