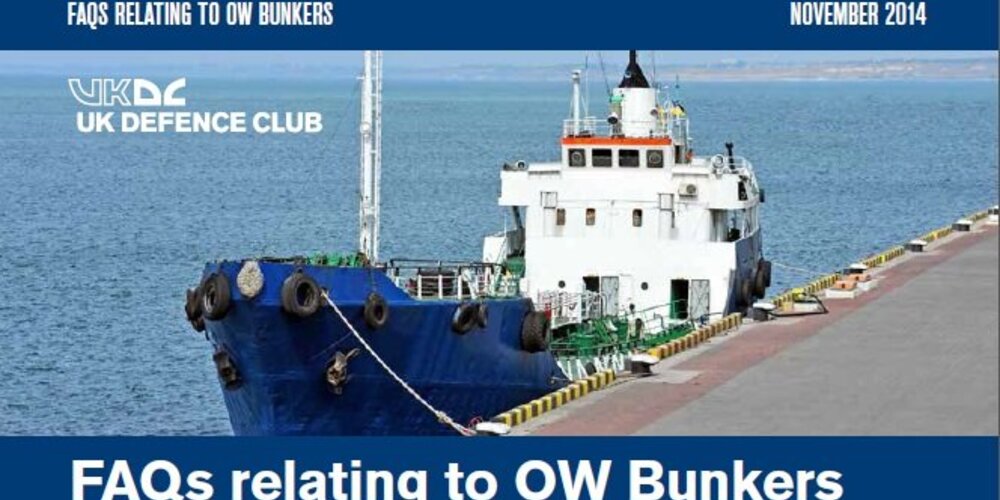 OW Bunker A/S the global marine fuel company filed for bankruptcy on the 7th November 2014 and reported two senior employees for fraud. The company had operations in 29 countries, and as one of the world’s largest independent bunker logistic companies had an estimated global market share of 7%. The rapid collapse of the company, seemingly overnight has lead to issues for some of our Members and charterers, with respect of who to pay and threat of arrest. The UK Defence Club have compiled a FAQ relating to OW Bunkers to assist Members.

1. What OW entities are affected?

Current information is that the two OW companies that have filed for liquidation are OW Bunker and Trading AS and OW Supply and Trading AS. However, in light of the $125m fraud in Singapore and $150m risk management loss which have led to this situation, it seems likely that the rest of the OW Group may follow.

2. Do OW act as physical suppliers and intermediaries?

Yes. In some instances OW are the physical suppliers of stems of fuel. In other cases fuel is supplied by third party suppliers but with OW remaining as the contractual supplier.

3. Will third party suppliers have a lien over the fuel and/or the ship?

This will depend on the local law where the lien is said to apply and the terms of the relevant supply contract with the Member. A bunker supplier may have a lien for the supply of necessaries even if they had no direct contract with the shipowner. If threats are made against the ship Members should contact the Managers and provide copies of all relevant papers including bunker supply contracts, invoices, charterparty and correspondence.

4. Stems from OW are being provided shortly. Should we change the on-board procedures?

No. Existing procedures in relation to sampling and segregation should be followed. OW’s financial difficulties may mean that any recourse claim against them may be difficult, for example for damages for engine damage, de-bunkering costs, cleaning fees, loss of time etc. Prevention of any contaminants entering the ship’s fuel system will be far better than the cure.

5. We have contracts with OW for the future supply of fuel. What should we do?

Contractual obligations, of course, will turn on the terms of the contract and the legal standing of the contractual counterparty; not all OW entities are in liquidation at this stage. The interpretation of the contract will be subject to the relevant law and jurisdiction clause. Local advice may be needed as to whether any contract with an OW entity is frustrated or can be terminated.

6. OW has sub-contracted with a third party supplier which is now demanding direct payment to them. We now face competing demands for payment by OW and the physical supplier. What should we do?

In the event that payment is made to OW then there is a considerable risk of an arrest of the ship (or a sister or an associated ship) by the physical supplier on the basis either that they have supplied necessaries (giving rise to a lien, perhaps a maritime lien) enforceable in a number of jurisdictions or on the basis that the physical supplier will say that they own the bunkers by way of a retention of title clause and thus the shipowner is converting their property. This is a risk which already exists in relation to bunkers previously supplied under contracts with OW where the physical supplier has not been paid. If competing demands are made for payment then the Member should consider:

If Members are under extreme pressure to pay a third party supplier in the face of an imminent threat to arrest the ship it may be that the most practical step would be to pay the supplier (in return for a full receipt and settlement agreement) and then defend or refute any claim from OW interests at a later date.

The contract terms should be carefully examined to identify if possible the OW entity and its sub-contractors. Assurances from one OW entity that third party suppliers can be paid directly may not bind other OW entities or non-OW contractual suppliers in what could be a bunker contracts chain. Any agreement by the relevant OW entity must be clear and explicit that a payment to the third party supplier will extinguish all claims by OW interests in relation to the relevant stem.

6.2 How much should be paid to the third party supplier?

If the price agreed with OW is the same price as that agreed between OW and its supplier then clearly that is the amount that can be paid. It seems likely that OW’s price will be higher than their supplier’s price. If a payment is made to the physical supplier then any difference, between the supplier’s price and OW’s price should be payable to OW. If not OW (or its liquidator) may have a residual claim for the price difference being the amount they would have expected to make on the bunker trade as an intermediary.

7. What approach should shipowners take when faced by a threat of arrest by physical supplier?

Many physical suppliers aggressively pursue claims for payment for bunkers even where they have contracted with the time charterer. In certain jurisdictions whether an arrest can be made will depend upon the law of the contract. That may be English law (albeit that the shipowners will not be a party to that contract) and one response to a threat of arrest is to offer security which responds to a London arbitration award or High Court judgment. As a matter of English law (in relation to privity of contract) the physical supplier ought not to be able to obtain an award or judgment against the shipowner in circumstances where they have no contract with them. However, questions may arise as to whether the shipowners had, or should have had, notice of any retention of title clause in the physical supply contract.

Owners have received competing demands for payment for the supply of [ ] metric tonnes of  [ ]at [ ] to the vessel [ ].

You will both appreciate that this puts the Owners in a position where they cannot pay one party or the other without risking a claim for payment by the other party. Owners therefore ask that OW and [ ] enter into an immediate discussion so as to reach an agreement as to the party to whom payment is to be made by Owners. In the event that no agreement can be reached, Owners reserve the right either to pay the funds into escrow or to interplead before a relevant Court in order for the Court to decide as to the proper recipient of the monies due.

8. What terms and conditions apply to my contract with OW?

9. The ship’s time charterer plans to load bunkers supplied by OW. Can the shipowner refuse?

Under the time charter, of course, the shipowner is bound to accept the time charterer’s lawful employment orders. The time charterer is responsible for payment for bunkers. How it chooses to make those arrangements (i.e. direct with a physical supplier or through another party) is a matter for that charterer. The mere fact that the shipowner apprehends that the supply of bunkers to the ship may give rise to an arrest or threat of an arrest later by the physical supplier does not of itself entitle the shipowner to refuse the order to load the bunkers in question. If the ship were subsequently to be arrested then the shipowners would be entitled to look to their time charterer for re-imbursement of any liability on the basis that the charterers had the obligation to pay for the bunkers supplied to the ship and it would not matter if they had in fact paid OW. The practical difficulty for the shipowners is that unless charterers are prepared to provide security to lift the arrest it would be necessary for the shipowners to provide security and then seek to pursue claims against the charterers under the charterparty. The financial standing of the charterers will obviously be important in this context.

10. In the event that shipowners are on notice of a supply of bunkers ordered by a time charterer from OW can any preventative steps be taken?

In some jurisdictions a notice given to the bunker suppliers may protect the shipowner against a subsequent arrest in the event of non-payment by OW. Some shipowners already use clauses for this purpose though it must be recognised that they are not binding in some jurisdictions and must, in any event, be given before the physical supply is made. Wording can be used such as:

We hereby put you on notice that the bunkers to be supplied to the vessel [ ] at [ ] are supplied under a contract between the vessel’s Time Charterers [ ] and [ ], a contract to which Owners are not a party. These bunkers are not supplied on the faith and credit of the Owners, their servants, agents or subcontractors, or the vessel, none of whom will have any responsibility for payment for them. No lien or other encumbrance whatsoever will be created by the supply of bunkers to the vessel [ ].

11. The ship’s charterer has failed to pay OW and suppliers are now demanding payment. What are the consequences?

It is possible that such conduct by the charterer will put them in breach of charter and an appropriate notice could be sent to them in order to hold them to their contractual obligations. The parties’ respective rights and obligations will turn on the terms of the relevant charter. It may be the case that the physical supplier will have the right to exercise a lien over the ship, notwithstanding that the shipowner may not have been privy to any bunkering contract. This will turn on local law. The fact that a charterer has failed to pay a supplier is unlikely to afford an owner with a defence in these circumstances.

The advice contained in the FAQ is intended for information purposes. For specific enquiries, please contact your Defence Insurer.