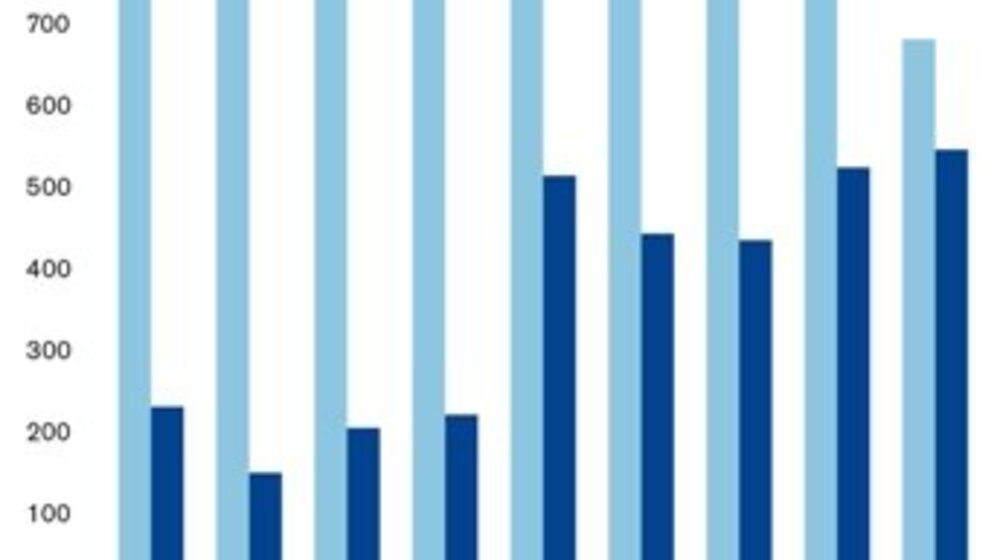 The graph opposite shows the number of claims reported to ITIC in policy years 2004 to 2012.

Indemnity files are those claims upon which ITIC may pay both a claim and the related legal fees. This cover represents ITIC’s main insurance taken out by all members who join the Club. Debt collection files are only for members who buy Rule 10 – Additional Legal Expenses Insurance and Debt Collection. These are typically shipbrokers and agents. The cover is for the legal fees incurred in collecting the monies owed.

A factor that has influenced the rise in debt collections in the 2012 policy year is the number of members who are filing claims in some large insolvency proceedings. Thirty-one claims have been opened in respect of one bankruptcy in Korea.

The financially troubled owner is a real risk for ITIC’s ship agent members. In one case the principal’s ship needed main engine repairs. The agent had ensured that the disbursement account was paid regularly as they realised that the owners had financial problems. The port authorities demanded that the berth be vacated and the ship moved to a layby. This required three tugs. In this particular country the agent had to provide the port with a bond which the port authority would draw upon if the principal did not pay. ITIC was able to assist the agent to secure their position.

Fraud is always seen in economically difficult times. Claims arising from fraudulent acts have continued to be seen in the last 12 months. These claims include both situations in which the members’ own staff have been the perpetrators as well as scams by third party criminals. Third party claims have arisen from the theft of freight by parties posing as brokers and liner agency staff being taken in by forged bills of lading.

For the first time in recent years ITIC witnessed the return of the problem of ship agents being used by unscrupulous migrant smugglers to move illegal immigrants around the world. The basic pattern is for owners/managers to approach the agent asking for the agent to attend the ship’s call including giving assistance with a crew change. The call is bogus but the agent has provided cover for the migrants’ arrival in the country. The migrants will disappear and the agent will be left with unpaid hotel bills and can face fines from immigration authorities as well as being liable for detention and repatriation costs if the migrants are caught. A circular was sent to all agents reminding them to be particularly vigilant when being approached by owners or crew managers, who are unknown to them, requesting a crew change. A copy of the circular is available on the ITIC website, at: http://www.itic-insure.com/rules-publications/article/itic-circular-crew-scam-warning-14017/

Indemnity claims arise from a wide variety of causes but many are simply caused by human error. A common source of claims from liner agents involves documentary mistakes relating to the temperature settings on reefer containers. The number one claim against tanker brokers remains demurrage claim documentation that has not been passed on by the broker within the time permitted in the charterparty. Often this is nothing more than a missed email.

Claims by ship owners against their managers frequently involve an allegation that the manager failed to maintain the ship over a period of time. Successfully defending these claims can require the production of vast amounts of documentary evidence. If not properly managed legal and expert costs can become disproportionately high. ITIC’s claims team has worked with ship managers to handle the burden of litigation and effectively resolve such disputes.

ITIC has dealt with a number of highly technical claims against the range of transport professionals it insures including marine surveyors and naval architects. Often by the use of technical expertise such claims can be resolved quickly, privately and without the damage to commercial relations that result from litigation.

The role of ITIC is not however restricted to handling claims. Loss prevention is an important part of ITIC’s work. In the last year ITIC has issued a number of circulars. Surveyor members are sometimes asked by a ship owner to sign an indemnity before they are granted access to the ship. ITIC has published advice and a suggested wording for Surveyors to use in these circumstances. Guidance on switch bills of lading has been provided for agents and others involved in the issue of bills of lading. Finally, ITIC’s e learning seminar on bills of lading has been refreshed and relaunched. It will be available on ITIC’s website in early October. We would encourage all members who have any dealings with bills of lading to remind themselves of what can go wrong, if thought is not given to the bill of lading.