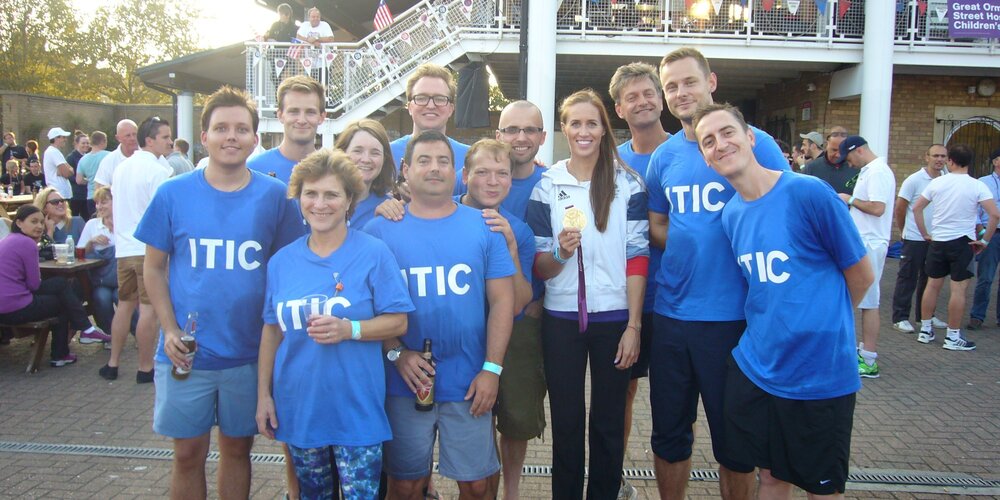 The intrepid ITIC, Puff the Negligent Dragon, boat team set off for the London Watersports Centre on a balmy September evening for the inaugural OSCAR dragon boat races. We were one of 26 teams all racing to raise money for Great Ormond Street Hospital, OSCAR campaign. Our fellow competitors were all from the maritime community and included Clarksons, Steamship Mutual, JLT, SOP, West of England and Ince, to name a few.

We were given instructions on land, where we all had to stand in pairs. It must have looked like a Moonie wedding ceremony, with paddles.

Then it was onto the water for the racing, where ITIC were drawn against International Registries and Ince. We came second with Ince clearly forgetting who their clients are!

A shore-side strategy talk led us to conclude that we needed to supplement our crew with some tall people. So, ITIC supporters, Jan Kohzer (Robin Travis Scholar) and Max Wentzel (ITIC summer intern) were press-ganged into joining the crew. ITIC's third supporter, Bob Grainger, timed his arrival perfectly, by being slightly too late to be part of the crew.

The result, with the Germans in stroke position,  was that the ITIC team were extremely close to being in the final. There were six teams in the final. ITIC were in 8th position, 0.3 seconds behind 6th place, so we set off for some light refreshments and to watch the final, which pitted ICAP Shipbrokers, Clarksons, R.S. Platou, Lloyds Register, Scorpio Tankers and Talbot Underwriting . It was close. There were 1.2 seconds between 1st and 6th places, with joint winners being declared of R.S. Platou and Scorpio.

The racing wasn't over. We moved over to watch the Director's Kayak Race featuring ITIC's finance director, Tim Evans, racing against Phil Parry, Mark Jackson (Nomikos), Nick Lockyer (JLT) and four others. There were no rules, with bumping, capsizing and any devious tactics allowed. Tim was cheered on by his number one supporter, British rowing gold medallist, Helen Glover. Tim took to clear water and look positioned well, but was pipped at the post by Mark Jackson and Ben Dyer (Steamship Mutual).

It was off to the bar for a well-earned beer and burger from the barbecue.

A great evening was had by all. ITIC raised GBP 6,000 and were, at last count, third in terms of raising funds. More than GBP 120,000 was raised, with more still to come.

Well done team Puff the Negligent Dragon and thank you to all who sponsored the team.