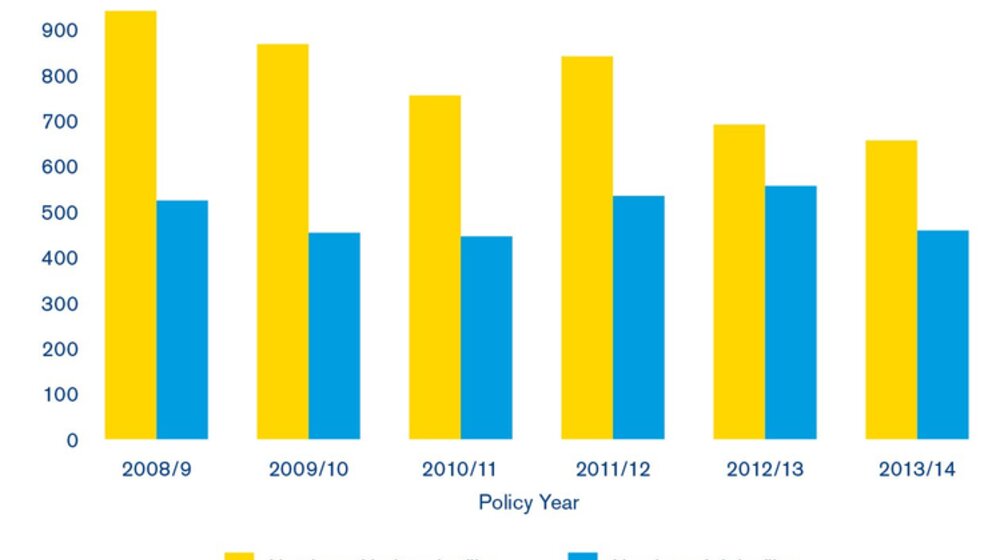 The graph shows the number of claims reported to ITIC for the five policy years to 31st May 2014. Claims are divided into two categories - indemnity and debt collection files. As can be seen, the claims situation in the 2013/14 policy has been encouraging with a fall in the number of indemnity files reported for the second year running.

Human error is the main cause of claims reported by ITIC Members. As in previous years, there have been a number of highly technical claims made, particularly against marine surveyors and naval architects. The aim is to resolve such claims quickly, privately and without the damage to commercial relations that results from legal proceedings. This is often achieved by ITIC with the use of technical expertise and sensitive claims management.

ITIC has continued to see an increase in attempts to defraud Members and their clients. In April 2014 ITIC issued a circular regarding a scam which has resulted in pre-funded port costs being diverted to a fake bank account. In each case the party due to make the payment received an email advising that the agent’s bank account was inoperable due to their annual audit. The message was sent using an email address very similar to the agent’s address. Details of a different bank account were given for the payment. By the time the agent reported that the pro forma disbursement account had not been paid the fraudsters had already stolen the money. A copy of the circular can be found at:

Debt collection files are only for members who buy Rule 10 – Additional Legal Expenses Insurance and Debt Collection. These are typically shipbrokers and agents. The cover is for the legal fees incurred in collecting the monies owed. ITIC has assisted in collecting over US$155m of shipbrokers’ commissions and ship agents’ disbursements since 1992.

Development of debt collection claims in the 2013/14 policy year have been promising as the overall number of debts reported to ITIC has been lower. This may reflect easier trading conditions. However, ITIC has arranged legal action in a wide variety of countries including arresting ships in New Zealand, India and UAE. Timing can be everything when pursuing debts and ITIC’s success in debt claims is dependent on prompt notification and a Member with a file in good documentary order.